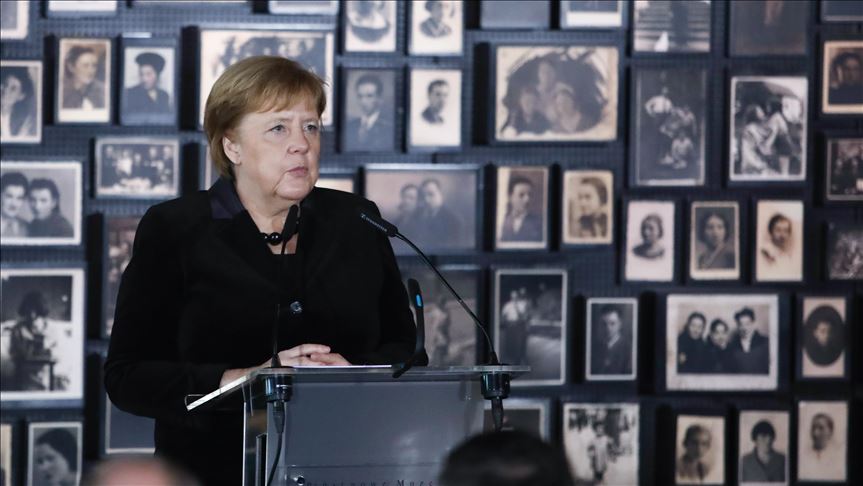 Prime Minister,
Director,
Excellencies,
Above all, survivors,
Ladies and gentlemen,

To stand here today and address you as Chancellor of the Federal Republic of Germany is far from easy. I am filled with a deep shame at the barbaric crimes committed here by Germans, crimes that defy all comprehension. One ought actually to fall silent in horror at what was done to women, men and children here in this place. Because what words could adequately express the grief? The grief over all those many people who were humiliated, tortured and murdered here? And yet, hard as it is in this place, more representative than any of the worst crime against humanity, silence must not be our only response. This site obliges us to keep the memory alive. We must remember the crimes that were committed here and name them clearly.

Auschwitz. This name stands for the millions of European Jews who were murdered, for the betrayal of all civilised values that was the Shoah. Auschwitz stands too for the genocide of Europe’s Sinti and Roma, for the suffering and murder of political prisoners and members of Poland’s intelligentsia, of resistance fighters, prisoners of war from the Soviet Union and other countries, homosexuals, people with disabilities and countless other people from all over Europe. The suffering of the people in Auschwitz, their deaths in the gas chambers, hunger, cold, epidemics, agonising pseudo-medical experiments, forced labour to the point of utter exhaustion – what happened here is beyond human comprehension.

At least 1.1 million people, the majority of them Jews, were methodically and ruthlessly systematically murdered in the Auschwitz camp complex alone. Every one of those people had a name, an inalienable dignity, a history, a story. The very manner of deporting them here, crowded into cattle wagons, the procedures on arrival and the so-called selection on the ramp – all were designed to dehumanise them, to rob them of their dignity and their individuality.

Remembering the crimes, naming the perpetrators and commemorating the victims in dignity is an unending responsibility. It is non-negotiable, and it belongs inseparably to our country. Being aware of this responsibility is an integral part of our national identity and defines who we are as an enlightened and liberal society, a democracy and a state based on the rule of law.

Today Jewish life is again flourishing in Germany. We enjoy wide-ranging friendly relations with Israel. That is by no means something we can take for granted. It is a precious gift. It is, indeed, something of a miracle. But it cannot undo what has been done. It cannot bring back the murdered Jews. There will always be a gaping void in our society.

The Basic Law of the Federal Republic of Germany entered into force 70 years ago. It took on board the lessons learnt from the horrors of the past. However, we also know that while the inalienable dignity of the individual, freedom, democracy and the rule of law are precious values, they are also vulnerable. That is why we must consolidate and enhance, protect and defend these fundamental values – both in our day-to-day coexistence and in government activity and political discourse.

These days, this is not mere rhetoric. These days, it is necessary to say this clearly. Because we are experiencing worrying racism, increasing intolerance and a wave of hate crimes. We are seeing an attack on the fundamental values of liberal democracy and a dangerous historical revisionism stoking forms of hostility directed at specific groups. We pay particular attention to antisemitism, which threatens Jewish life in Germany, Europe and beyond.

And so we need to state this more clearly: we will not tolerate antisemitism. Everyone must be able to feel safe and at home in Germany, in Europe. Auschwitz in particular serves as a warning and obliges each and every one of us to be alert every day, to preserve humanity and to protect our neighbour’s dignity.

Because, as Primo Levi, who was born in Turin 100 years ago and who survived Auschwitz as a forced labourer in Monowitz, later wrote: “It happened, therefore it can happen again.” So we cannot close our eyes and ears when people are being verbally abused, humiliated or marginalised. We must confront those who stir up prejudice and incite hatred against people of different faiths or origins.

We all of us bear responsibility. And that responsibility includes remembrance. We must never forget. No line can ever be drawn under this past, nor can it ever be downplayed.

Or in the words of Noach Flug, an Auschwitz survivor and former President of the International Auschwitz Committee: “Memory […] is like water: it is essential to life and it finds its own way to new spaces and to different people. […] It has no expiry date, and you cannot decree that it has been dealt with or brought to a conclusion.”

Thanks in particular to the many testimonies of survivors, this memory which is essential to life, seeks – as Noach Flug said – and indeed finds ways. I am therefore very pleased to greet some of them here today. Over the years, you have talked about the suffering you endured many times, and you have told us again today. Who can imagine how much strength it takes to live through these painful experiences time and again or even to return to this place? You share your story so that young people can learn from it. You summon up the courage and strength to foster reconciliation. You have truly shown human greatness. I am very grateful that we can hear and learn from you.

We will soon be marking the 75th anniversary of the liberation of Auschwitz. Ever fewer individuals can tell their story from this time. This prompted the author Navid Kermani to very aptly say: “[…] In order to ensure that a memory connected to the memorials, Stolpersteine (stumbling stones) and commemorative ceremonies is etched in our hearts, it will be even more important for future generations to see with their own eyes the places where Germany crushed human dignity, to travel to those countries which it drenched in blood.”

In many places, the perpetrators tried to cover their tracks – be it in extermination camps such as Bełżec, Sobibór and Treblinka, be it in places such as Maly Trostenets, Babi Yar or in the thousands of other places around Europe where Jews, Sinti and Roma, many others and even whole villages were murdered.

Here in Auschwitz, however, the SS and their henchmen did not manage to wipe out all traces of what they had done. This place bears witness to what happened. And this must be preserved. Anyone who comes to Auschwitz and sees the watchtowers and the barbed wire, the barracks and the cells, the remains of the gas chambers and the crematoriums, will never be able to forget it. It will, as Kermani wrote, “be etched in their hearts”.

Ten years ago, the former Polish Foreign Minister Władysław Bartoszewski, who was himself a political prisoner in Auschwitz, initiated the Auschwitz-Birkenau Foundation.

Mr Cywínski, I would like to express my heartfelt thanks to you and to everyone in the Foundation who have made it their mission to conserve this place as a memorial and documentation centre. I would also like to thank everyone involved in the restoration and conservation projects. You have been working with great dedication to ensure that this place continues to bear witness. Brick barracks have been restored to secure their long-term conservation, excavations have been carried out, supporting walls installed, protective tents put up, the stolen clothes and belongings of the victims restored and conserved.

The Foundation capital will have to be substantially increased in order to fund the conservation plans for the next 25 years. Germany will make a significant contribution. This was decided yesterday together with the Minister-Presidents of the Länder.

Thanks to the Foundation, as well as the many international guides, this memorial is a place of learning, of remembrance and of awareness – a place which so impressively conveys the message: “Never again”. For that I am profoundly grateful.

However, nothing can bring back the people who were murdered here. Nothing can reverse the crimes committed here, crimes that are without parallel. They are and will remain part of German history. This history must be told, time and again, so that we remain vigilant, so that such crimes are not repeated, not even on a lesser scale, so that we can take resolute action against racism and antisemitism in all their abhorrent forms. This history has to be told so that today and in the future we can protect the dignity of every individual and so that we honour the memory of the victims.

Those who survived were severely affected by the horrors they had experienced. Margot Friedländer wrote in her memoir that they first of all had to learn again that they were human beings, human beings with a name.

Many asked themselves why they had survived. Why not their little sister? Why not their best friend? Why not their own mother or their husband? Many of them only learned later, or not at all, how and where their loved ones had been murdered. Such wounds never heal.

Thank you very much for inviting me to be here today.