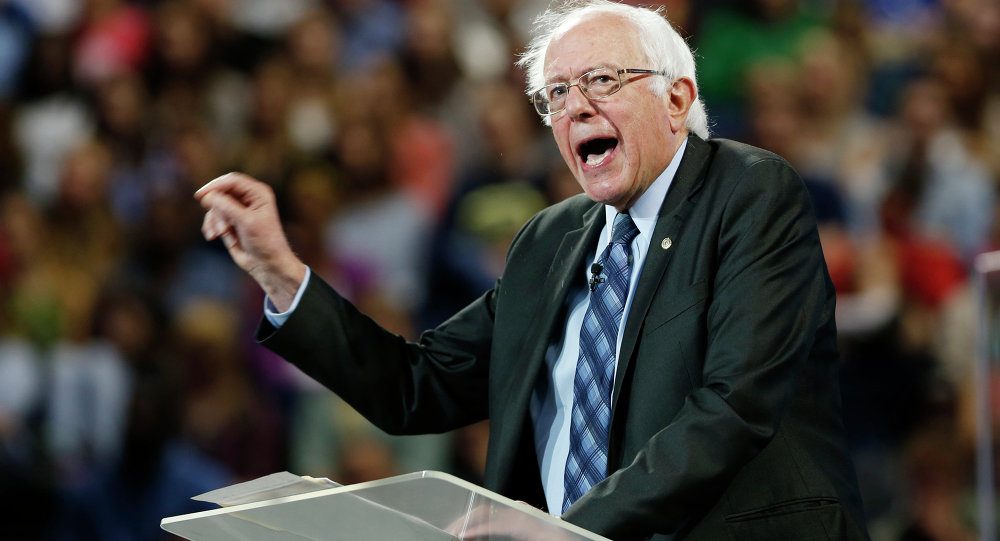 Thank you all very very much for being out here today. Let me just make a brief comment and take a few questions. We don’t have an endless amount of time. I have to get back.

Let me just say this. This country today in my view, has more serious crises than any time since the Great Depression of the 1930s.

For most Americans, their reality is that they are working longer hours for lower wages. In inflation-adjusted income, they are earning less money than they used to, years ago, in spite a huge increase in technology and productivity.

bernard sanders 2016 announcement speechSo, all over this country, I have been talking to people, and they say, â€œHow does it happen? I’m producing more, but I’m working longer hours for lower wages. My kid can’t afford to go to college, and I’m having a hard time affording health care. What happened, while at exactly the same time, 99 percent of the income being generated in this country is going to the top 1 percent?â€

How does it happen that the top 1 percent owns almost as much wealth as the bottom 90 percent? And, my conclusion is that that type of economics is not only immoral, is wrong, it is unsustainable. It can’t continue.

We can’t continue having a nation in which we have the highest rate of childhood poverty of any major nation on Earth, at the same time as we’re seeing a proliferation of millionaires and billionaires.

So, that’s the major issue. The major issue is how do we create an economy that works for all of our people rather than a small number of billionaires, and the second issue, directly related, is the fact that as a result of the disastrous Supreme Court decision on Citizens United, we now have a political situation where billionaires are literally able to buy themselves elections and candidates. Let’s not kid ourselves. That is the reality right now.

So, you’ve got the Koch Brothers and other billionaire families who are prepared to spend hundreds and hundreds of millions of dollars in elections to buy the candidates of their choice, often extreme right wing candidates.

I am the former chairman of the Senate Veterans Committee, and I can tell you that I don’t believe that the men and women who defend American democracy fought to create a situation where American billionaires own the political process. That’s a huge issue that we’ve got to deal with.

Right now, in terms of issues, we have a Republican Party that with few exceptions does not even recognize the reality of climate change, let alone that it is caused by human activity, let alone that the scientific community tells us that this is the major global environmental crisis that we face, and I want to see this nation lead the world in transforming our energy system away from fossil fuels, to energy efficiency and sustainable energy.

Real unemployment in America is not five and a half percent, if you include those people who have given up looking for work, and people who are working part time when they want to work full time. Real unemployment is 11 percent. We need to create millions of jobs, and the best way to do it is to rebuild our crumbling infrastructure, and I’ve introduced legislation to do just that: Create and maintain 13 million jobs.

In my state of Vermont, and throughout this country, young people, bright, young, able kids, cannot afford to go to college and are leaving school deeply in debt. In Germany, countries around the world, they understand that you tap the intellectual capabilities of young people, and you make college tuition in public colleges and universities free. That is my view as well.

So, there are enormous issues facing this country. Let me conclude by saying this, and I say this to the media: I have never run a negative ad in my life. I have been in many campaigns, and you ask the people of Vermont, they will tell you, â€œBernie Sanders has never run a negative ad. I hate and detest these 30 second ugly negative ads.

I believe that in a democracy, what elections are about are serious debates about serious issues, not political gossip, not making campaign soap operas. This is not the Red Sox versus the Yankees. This is the debate over major issues facing the American people.

Honest people, my conservative friends, differ with me. That’s fine. That’s called democracy. It’s a good thing, but I’ve got to hope, and I have to ask the media’s help on this thing: Allow us to discuss the important issues facing the American people. Let’s not get hung up on political soap opera, and all the other aspects of modern campaigns