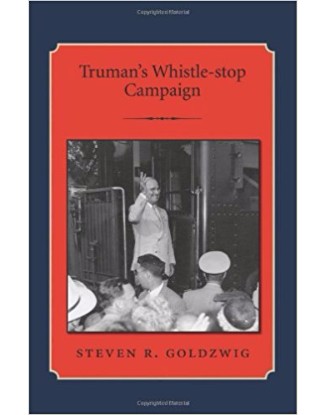 Faced with the likely loss of the 1948 presidential elections, Harry S. Truman decided to do what he did best: talk straight. When Truman boarded the train to head west in June 1948, he and his campaign advisors decided to shift from prepared text to extemporaneous stump speeches. The “new Truman” emerged as a feisty, engaged speaker, brimming with ideas on policies and programs important to the common citizen.Steven R. Goldzwig engagingly chronicles the origins of Truman’s “give ’em hell” image and the honing of his rhetorical delivery during his ostensibly nonpolitical train trip west, which came to be known as his “whistle-stop tour.” At the time, Truman was both applauded and derided by the public, but his speeches delivered at each stop helped win him the presidency.

Goldzwig’s detailed look at the background of the campaign, Truman’s preparations and goals, the train trip itself, and the text and tone of the speeches helps us better understand how Truman carried the 1948 election and came to represent the plainspoken “man of the people” who returns from behind to win, against all odds.