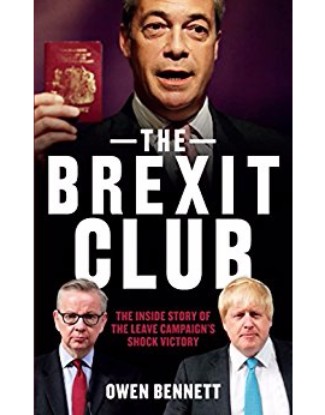 The Brexit Club: The Inside Story of the Leave Campaign’s Shock Victory

From Boris Johnson to Nigel Farage, George Galloway to Michael Gove, the campaign to get Britain out of the EU brought together some of the most colourful characters in British politics. This once-in-a-generation opportunity to free the UK from the grip of Brussels saw egos put to one side and rivalries put on hold to push for a Leave vote in the EU referendum … Or did it?

As D-Day drew near, political reporter Owen Bennett went deep into Leave territory to reveal the inside story of the battle for Brexit. Behind a campaign promising hope and glory – but seemingly mired in blood, sweat and tears – Bennett discovered a plethora of Leave groups, all riven with feuds: the Tory ‘posh boys’ against the ‘toxic’ hardliners; UKIP’s only MP against the rest of the party; Michael Gove’s former lieutenant Dominic Cummings against almost everyone else.

Charting the crusade from the massing of the UKIP foot soldiers after the general election to the arrival of the Cabinet cavalry after Cameron’s Brussels deal and the dramatic final weeks’ fighting on battle buses, The Brexit Club reveals the truth behind the campaign that divided friends, families and, ultimately, the country.