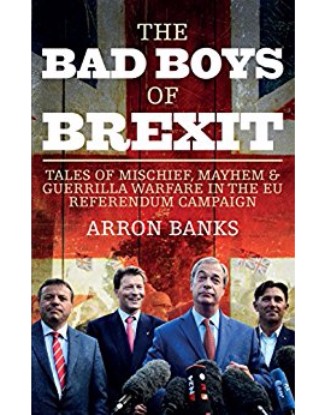 The Bad Boys of Brexit: Tales of Mischief, Mayhem & Guerrilla Warfare in the EU Referendum Campaign

Arron Banks enjoyed a life of happy anonymity flogging car insurance in Bristol until he dipped his toes into the shark-infested waters of politics – and decided to plunge right in. Charging into battle for Brexit, he couldn’t believe how Westminster types behaved, and resolved to fight for the country’s future his own way.

From a David Brent-style office on an industrial estate in the south-west, Banks masterminded an extraordinary social media campaign against the tyrannies of Brussels that became a mass movement for Brexit. He tore up the political rule book, sinking £8 million of his personal fortune into a madcap campaign targeting ordinary voters up and down the country. His anti-establishment crusade upset everyone from Victoria Beckham to NASA and left MPs open-mouthed.

When his rabble-rousing antics landed him in hot water, he simply redoubled his efforts to wind up the targets. Lurching from comedy to crisis (often several times a day), he found himself in the glare of the media spotlight, fending off daily bollockings from Nigel Farage and po-faced MPs. From talking Brexit with Trump and trying not to embarrass the Queen, to courting communists and wasting a fortune on a pop concert that descended into farce, this is his honest, uncensored and highly entertaining diary of the campaign that changed the course of history.