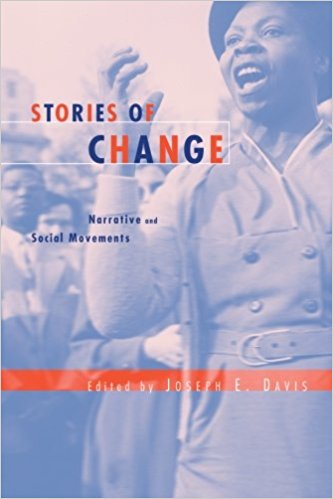 Despite the amount of storytelling in social movements, little attention has been paid to narrative as a form of movement discourse or as a mode of social interaction. Stories of Change is a systematic study of narrative as well as a demonstration of the power of narrative analysis to illuminate many features of contemporary social movements. Davis includes a wide array of stories of change—stories of having been harmed or wronged, stories of conflict with unjust authorities, stories of liberation and empowerment, and stories of strategic success and failure. By showing how these stories are a powerful vehicle for producing, regulating, and diffusing shared meaning, the contributors explore movement stories, their functions, and the conditions under which they are created and performed. They show how narrative study can illuminate social movement emergence, recruitment, internal dynamics, and identity building.

“This book treats a topic that reflects issues that are currently on the cutting edge of the field of social movements and moves it forward. It is quite interesting to read, especially since some of the movements have not had much written about them and are generally less contentious than the movements that received center stage.” — William A. Gamson, author of Talking Politics

“A contribution to the growing ‘cultural turn’ in the study of social movements, this book’s major strength is its focus on a particular aspect of culture—narrative—and its uses in movements. The topic is significant in that the dominant approaches to social movements and culture have been cognitive, strategic, and other forms of ideological analysis. Attention to affect, stories, and narrative forms a coming wave.” — Rhys H. Williams, editor of Promise Keepers and the New Masculinity: Private Lives and Public Morality