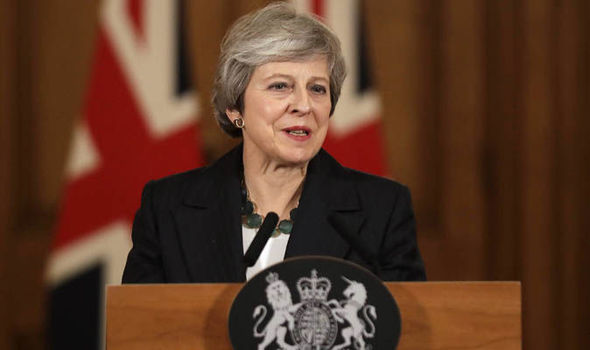 With permission, Mr Speaker, I would like to update the House on our negotiations to leave the European Union.

Last week I set out the details of the draft Withdrawal Agreement which will ensure our smooth and orderly departure when leave the European Union on the 29th of March next year.

I also updated the House on the outline Political Declaration that set out a framework for the future relationship we want between the UK and the EU.

Last night I met with President Juncker in Brussels to work through the details of the full Political Declaration on this future relationship.

We had good discussions in which I was clear about what we need in order to ensure the best possible deal for the United Kingdom.

We then tasked our negotiating teams to work through the remaining issues.

As a result, the text of the political declaration has now been agreed between the UK and the European Commission. And I updated the Cabinet on this progress this morning.

Mr Speaker, the draft text that we have agreed with the Commission is a good deal for our country and for our partners in the EU.

It honours the vote of the British people by taking back control of our borders, our laws and our money while protecting jobs, security and the integrity of our precious United Kingdom.

It ends free movement once and for all. Instead we will introduce a new skills-based immigration system â€“ based not on the country people come from, but on what they can contribute to the UK.

It ends the jurisdiction of the European Court of Justice in the UK. We will make our own laws in our own Parliaments, here in Westminster, and in Edinburgh, Cardiff and Belfast, and they will be adjudicated on by UK Courts.

And it means an end to sending vast sums of money to the EU.

So we can take full control of our money to spend on priorities, including our long-term plan for the NHS, to which we have committed to spending over Â£394 million more per week by 2023/24.

And just this morning I was able to announce a major new investment in primary and community care worth Â£3.5 billion a year in real terms by 2023/24.

Mr Speaker, the text we have now agreed would create a new Free Trade Area with the EU, with no tariffs, fees, charges or quantitative restrictions.

This would be the first such agreement between the EU and any advanced economy in the world, which will be good for jobs.

The EU said that the choice was binary – Norway or Canada. The Political Declaration recognises that there is a spectrum, with the extent of our commitments taken into account in deciding the level of checks and controls.

Crucially, the text we have agreed also has an explicit reference to development of an independent trade policy by the UK beyond this partnership with the EU.

So we would have the ability to sign new trade deals with other countries and capitalise on the opportunities in the fastest growing economies around the world.

And we would be able to get on with this â€“ negotiating deals during the Implementation Period and putting them in place immediately afterwards.

Mr Speaker, let me be absolutely clear about what this would mean for fishing.

We would become an independent coastal state, with control over our waters so our fishermen get a fairer share of the fish in our waters.

The fisheries agreement is not something we will be trading off against any other priorities.

We are clear that we will negotiate access and quotas on an annual basis, as for example, do other independent coastal states like Norway and Iceland.

The trade agreement with the EU would also cover services and investment that will go further than any other recent EU agreements.

And it would secure new arrangements for our financial services sector â€“ ensuring that market access cannot be withdrawn on a whim and providing stability and certainty for our world-leading industry.

We would also have a cutting edge agreement on digital helping to facilitate e-commerce and reduce unjustified barriers to trade by electronic means.

And there would be strong rules in place to keep trade fair and ensure neither side can unfairly subsidise their industries against the other.

The text we have agreed with the European Commission also includes a new security partnership, with a close relationship on defence, and tackling crime and terrorism to keep all our people safe.

There would be a surrender agreement to bring criminals to justice no matter where in Europe they break the law.

And there would be arrangements for sharing of data, including on DNA, Passenger Name Records, and fingerprints.

The new Security Partnership would also ensure close co-operation between our police forces and other law enforcement bodies.

And we would continue to work together on sanctions against those who violate international rules or commit atrocities.

And there would be joint working on meeting cyber-security threats and supporting international efforts to prevent money laundering and the financing of terrorists.

Finally, as I set out for the House last week, the draft Withdrawal Agreement will ensure that we transition to this new and ambitious future relationship in a smooth and orderly way.

It will deliver a 20-month Implementation Period so that we have time to put our new future relationship in place and that businesses have time to prepare for it.

It will ensure a fair settlement on our financial obligations â€“ less than half what some originally expected.

And it will meet our commitment to ensure there is no hard border between Northern Ireland and Ireland and no customs border in the Irish Sea.

Mr Speaker, the text we have agreed is explicit about the determination of both sides to avoid the backstop altogether by getting the future relationship in place on the 1st of January 2021.

And in the unlikely event that we ever did need the backstop, to ensure it is quickly superseded either by the future relationship or alternative arrangements.

As part of this, there is an explicit commitment to consider facilitative arrangements and technologies which could avoid a hard border on the island of Ireland.

And I am grateful to My Rt Hon Friends the Members for Chingford and Woodford Green and for North Shropshire for their ideas on this.

Preparatory work on alternative arrangements to avoid the backstop would begin before we leave, enabling rapid progress after our withdrawal.

Mr Speaker, I want to be very clear about the stage we have reached in these negotiations and the scale of what is now at stake.

We have an agreed text between the UK and the European Commission.

This text is today being shared with the leaders of the other 27 Member States ahead of the special EU Council on Sunday.

The negotiations are now at a critical moment and all our efforts must be focused on working with our European partners to bring this process to a final conclusion in the interests of all our people.

Last night I spoke to Prime Minister Sánchez of Spain. We have been working constructively with the governments of Spain and Gibraltar in the negotiations on the Withdrawal Agreement.

Today I met Chancellor Kurz of Austria, which currently holds the EU’s Presidency. And later today and tomorrow I will be speaking to other European leaders ahead of returning to Brussels on Saturday.

Mr Speaker, the British people want Brexit to be settled.

They want a good deal that sets us on a course for a brighter future.

And they want us to come together as a country and to move on to focus on the big issues at home, like our NHS.

The deal that will enable us to do this is now within our grasp.

In these crucial 72 hours ahead, I will do everything possible to deliver it for the British people.

And I commend this Statement to the House.