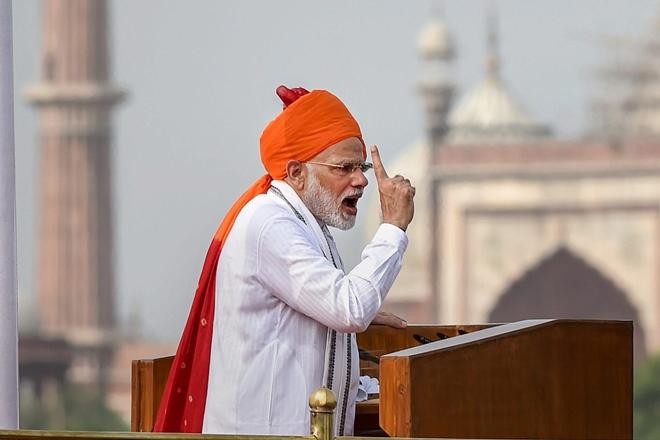 I have got the opportunity to honour some achievers from across the country, who are supporting this special initiative. A library has been launched and a white paper related to rural India is also being formulated. I am glad that you are working keeping in mind the country’s needs and prioritizing them. I congratulate you for all your achievements till date. Both my best wishes and the government’s support will be with you for successful accomplishment of your goals.

Friends, Gone are the days, when India was considered to be among the ‘Fragile Five’. Today, we are the fastest growing economy in the world. Powered by the Hundred and Twenty Five Crore people of India, we will grow even faster. As per an international report, poverty is declining in India at a record pace. Five crore people have moved out of poverty in the last two years according to the report. Who do you think is making this possible? It is the people of India. The Government can only play the role of an enabler. It is the youth, who are not only making use of available opportunities but also creating new ones themselves. This is not the India of “चलता है” attitude. That is gone now. This is our new India.

New India is equivalent to 125 crore. However, its basis is ‘Young India’. The youth power of the youngsters is free from the archaic working style and ideas. This section of the youngsters has inspired to transform the outdated systems. Some people wait for the atmosphere to change in order to bring about a transformation while others themselves change the atmosphere by taking a resolution for transformation. You are not among those who wait but the ones who bring about the transformation themselves because you have a mindset of a harbinger of change. The mindset or the will power is the key to achieve success rather than dependence on favourable situations. Today, the youth of the country is engaged in nation building with this tremendous will power.

Friends, Today’s India is doing nothing small. Just like the aspirations and power of the youth, India is doing big, transformative things. More than 3 crores children have been vaccinated thus boosting the health of India’s future. This is a big number. Who’s at the lead of this? Young doctors, nurses, support staff and volunteers. India built 1.75 lakh kilometres of rural roads in the last 4 years. Who built them? Young labourers and workers. India made electricity reach every single village in the last 4 years. Eighteen thousand villages were electrified and this target was completed on time. Now, we are electrifying every home. Eighty Five lakh homes have been electrified since October 2017. Who brightened the homes of their fellow citizens? Young electricians and technicians, who made 4 crore and 65 lakhs gas connections reach the poor? Yet again, India’s youth. And, they did this not for themselves but out of care and concern towards poor women, many of whom live in rural areas. More than one crore homes have been built for the poor in the last 4 years. Who did it? It was young engineers, masons and labourers who made this possible. These numbers are mostly only in crores! They are big numbers. Why are these big numbers possible? Because of another big number the 800 million people of India under the age of 35.

Anyone will be envious of a country with such an unprecedented youth power. Therefore, I believe that you have chosen the most apt tagline for this event – ‘It’s our turn now.’ the word ‘our’ also refers to a citizen as well as the country. Friends, there was a time when the country was ruled only by the monarchs. This system was prevalent centuries ago. After independence when the constitution was framed by Babasaheb Ambedkar and democracy was established, new kind of ‘monarch rule’ started. After independence, even in politics, three generations of the same family were ruling. The rule was under the control of some families. However, today the situation has changed and you, my countrymen have changed it. See, today the President, the Vice President and I belong to a small place. Even our ancestors were not so well-known. We belong to a family of a common man. We have been democratically elected which depicts that how the public opinion has changed. This applies not only to these three posts, but also to the Chief Ministers of the states. The Chief Ministers such as Yogi Adityanath ji, Tripura’s Biplab Deb, Uttarakhand’s Trivendra Singh Rawat, Madhya Pradesh’s Shivraj Singh Chauhan, Bihar’s Nitish ji, Haryana’s Manoharlal ji and Jharkhand’s Raghubar Das ji belong to the families of common man. The public has elected them to this high post. They have lived a simple life and therefore are more empathetic towards the problems of the poor. They have dedicated their lives working with the youth and its aspirations. They completely understand what the New India’s youth desire.

Isn’t it a change? I believe that this is a positive indication for our country’s democracy. We can see such an environment not only in politics but also in every other area. The number of youngsters from rural areas and small towns, becoming IAS and IPS and getting into government service, is increasing. The big dreams of people from small towns will also be fulfilled now. This change is the identity of the New India. If you consider the area of sports or toppers of class 10th and 12th, you will find that today these toppers are not from schools in big cities but smaller towns and villages. Even the talented sports persons these days are from smaller villages. This is the discernable change.

Friends, A few days ago, an 18-year-old from the rice fields of Assam captured the attention of the entire world. I am talking about Hima Das. In her run, you can see the grit and power just shine through. In fact, there are such youngsters bringing home medals and records. They represent New India. They overcame steep odds, showed great determination and achieved great heights. We are a top sporting power in badminton, doing well in shooting, weight-lifting and many more sports. Those bringing home the medals are from smaller towns. They belong to simple middle class or neo-middle class families. Young India feels “Anything is possible! Everything is achievable.” This spirit will drive India’s growth.

Today India’s status on the international platform has improved considerably and its reputation has again been established. It has instilled a new self-confidence in the youth. There is an equality of opportunities. This is the result of transparency, identification of talent and respect. The foundation stone of the New India is being strengthened with a new approach and myriad efforts such as Skill India, Start-up India, Stand-up India, Khelo India and Digital India. Looking for solutions is now being emphasized by putting an end to silos. Schemes are being devised keeping the needs of the country in mind. We are working towards eliminating even the smallest of the issues of the youth, entrepreneurs, women, farmers and the middle class in order to make their lives easier.

Ideas and innovation have always been a part of daily lives of the people of India. However, an environment is being created so as to utilize these powers of the youngsters for nation building as much as possible. The government is promoting these aspirations and capabilities of the youth towards research and innovation. Atal Innovation Mission has been started to create an environment of innovation even at school level. We are emphasizing upon our efforts to create an ecosystem of innovation in the country’s schools and colleges. More than 2400 Atal Digital labs have been approved across the country to improve the scientific temper and to provide a platform for creativity of the students. Students are being acquainted with the future technologies. Programmes like Smart India Hackathon are being organized for promoting innovative ideas. The country’s youth is being directly connected with the work of coming up with the solutions to the country’s problems through this programme. The youth will step into the world of start-ups by walking on this path.

We have seen that how the people had come forward to give the test during the government’s crack down on black money and corruption and the implementation of GST. This is an evidence of the change that is sweeping the country. I remember clearly that when we had started discussing about digital payments, some experts were saying that a poor country like India cannot progress on this front. However, today you can see the progress in digital payment for yourself. The credit goes to the youth for taking this system of digital payments in every village of the country. People have started using digital payment methods.

Today we have one of the best opportunities. We belong to a generation that is not fortunate to have got the opportunity of sacrificing its life for the country. However, we have the opportunity to contribute to the nation building and to live for the country. History is a witness to the fact that even youngsters had reigned in the situation during the freedom struggle. The zeal and morale of the youth had played a decisive role in the freedom struggle. You all are going to play the same role today for building a New India. You all have to create that New India of which our freedom fighters, the people who had sacrificed their lives for the country had dreamt.

Friends, New India is that land, where you make your name, your name does not make you, where your ideas matter, not your influence, where opportunities beckon instead of obstacles. Where a billion aspirations, find free flowing expression, where the journey to progress is powered by one and all, instead of a select few. It is the place, where processes drive progress, instead of people influencing processes where the Government belongs to everyone, instead of everything belonging to the Government, where the power of hope prevails over mindless hate, where 125 crore Indians write their own destiny instead of being left to their own fate. This is our New India!

You are the present and the future of India. India needs your participation. We don’t need just listeners but those youngsters who can provide suggestions to us and work with us hand-in-hand.

The country will succeed if you succeed. The country’s resolutions will be fulfilled if your resolutions are fulfilled. Once again I offer my best wishes to the entire team of ‘Youth for Development’ for this grand Initiative. I would specially like to congratulate the people who were honoured today because their every work and effort will be talked of and discussed. Their work will automatically become an inspiration for everyone else and I believe that actions speak louder than words. You are the ones who have dedicated your lives for fulfilling your dreams by working in villages and slums in the remotest corner of the country. You have accomplished what you had thought of. As a result, you are experiencing greater levels of satisfaction today. The work that satisfies oneself has tremendous power of inspiring others. I congratulate all the youngsters who have achieved this from the core of my heart.