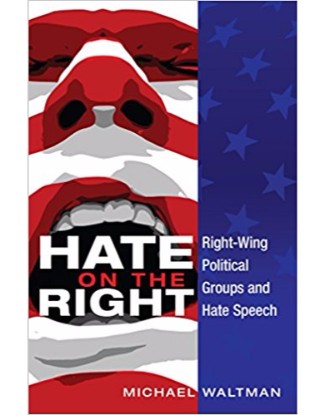 Hate on the Right: Right-Wing Political Groups and Hate Speech

This book examines the ways that hatred comes alive in language and discourse. It asks whether much of the discourse on the political right – that which attacks their enemies – is hate speech. Extending Michael Waltman’s previous work on hate speech, this book examines the discourse and language produced by a variety of right-wing groups and attempts to determine the homology that exists among their discourses. hese groups, which include the racist right wing, the political right wing, the Christian right wing, and the paramilitary right wing, are examined respectively through the lenses of the film White Apocalypse, the book Atlas Shrugged, the Left Behind trilogy of movies, and the web pages maintained by the Republic of the United States of America and the National Rifle Association.

The author looks at the discourses of hate produced in these seminal texts in order to identify a homology of exclusion that unites the forms of right-wing extremism, giving them a common frame of reference when confronting social and political challenges.