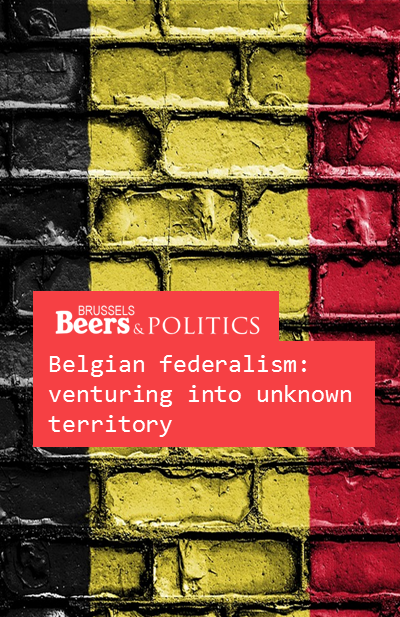 We would like to thank Dave Sinardet (@DaveSinardet) for debating with the participants of Beers&Politics Brussels.

Here is a summary of what has been said (also, you can read the storify here):

Belgium is composed of overlapping Regions and Communities. There are three Regions; Flanders, Brussels-Capital and Wallonia; and three Communities; Flemish, French and German-speaking Communities.

This introduction helps us understand why the coalition formed in early October 2014 already holds a special place in Belgium’s political history.

First, it contains just one francophone party, making it the first government to be supported by a relatively small minority in one of the country’s two main language groups. In a federal system built on constant linguistic balance, never more than a few seats in the past had been missing one side or the other to achieve a majority. Now, only 20 out of the 63 francophone MPs support the government: they hail from the liberal Mouvement Réformateur (MR) party of prime minister Charles Michel, which allied itself to three right-of-centre Flemish parties: Flemish nationalists, Christian democrats and liberals.

Not pursuing majority support in both language groups permitted the parties to agree on a coherent government programme. The first federal coalition since 1988 without the French-speaking Parti Socialiste (PS) can now carry out a number of liberal reforms and deep cuts in government spending.

Implementing them in the consensual Belgian system might be more difficult, however, as left-of-centre parties close to trade unions are contesting the reforms, even though they initiated some of them while in government. The position of the MR is further complicated by the fact that it is under attack from other francophone parties for allying itself with the Flemish separatist party, the N-VA, some of whose ministers have been accused of defending racist positions and excusing second world war collaboration with the Nazis.

The participation of N-VA in a federal government is a second novel element: it marks a radical departure for Flemish nationalist parties, which would previously join coalitions only in return for another increase in Flemish autonomy.

Now they have signed the first coalition accord in 30 years that does not even contain a hint of such reform. The immediate reason for this is simple: no other parties had appetite for more institutional tinkering and N-VA did not want to spend five years in opposition. But the move also reflects the party’s more fundamental shift from traditional nationalist discourse to a liberal socio-economic platform.

As most Flemish people are not interested in autonomy as a goal in itself, the N-VA presented votes for it as a means of enabling a rightwing economic policy without being beholden to the PS, traditionally Wallonia’s strongest party. After attracting support from Flemish employers’ organisations and right-of-centre voters, the N-VA had to deliver.

Just reverse left and right and the N-VA’s argument is quite similar to that of the Scottish nationalists, who in the recent referendum campaign presented a “yes” to Scottish independence as opening the way to a more leftwing future, freed of Tory domination. Of course, Scots are a minority in the UK, while the Flemish, as the majority group in Belgium, supplied the country’s prime minister for decades in a row. Yet the mingling of the “national” and socio-economic debate was common to both cases.

Similarly, the N-VA leadership reassured its nationalist rank and file by stating that conducting a rightwing policy in Belgium would lead Walloon socialists to demand more autonomy, thus precipitating a break-up of the country. Indeed, a past drive for economic autonomy in Wallonia came from the left, which in the 1970s felt it could not fight industrial decline with leftwing reforms because economic policy was dominated at national level by right-of-centre Flemish Christian Democrats. Now, however, all studies show that splitting up the federal social security system would only impoverish the Walloon region. So the PS is not likely to start pleading for more regional autonomy.

In the meantime, being the main opposition party at national level while still leading the Walloon and Brussels regional governments, puts the PS in an awkward position. At regional level, it promotes a business-friendly image of Wallonia, attracting foreign investments with tax incentives. Wearing its opposition hat, it attacks the federal government with old-school leftwing rhetoric that could encourage social instability, specifically in the south of the country.

In a negative advertising campaign, the PS accused the “MR-N-VA-government” of stealing from ordinary people. It was referring to federal government plans to suspend automatic indexation of salaries to inflation in order to cut labour costs and boost the economy, including in PS-run Wallonia.

And here we have the third peculiarity of the new situation: the absence of any overlap between French-speaking parties in the federal and the regional governments. This could create tensions, since intergovernmental co-operation is crucial in a federal system with overlapping competences over a small territory.

This summary is based on an article published by the Financial Times on November 5, 2014

About Beers&Politics:
Beers&Politics events last for 1 hour and are divided as follows.
During the first 30 minutes, the speaker gives a presentation while attendants are allowed to interrupt him/her as they feel convenient.
The last 30 minutes are dedicated to a Q&A/Debate between the speaker and the participants.
Afterwards, the participants can stay in the bar and network with fellow political communications’ geeks and other specialists.
This event is free of charge for participants. Speakers are not remunerated but get all their drinks for free that night.

Centrist Rhetoric: The Production of Political Transcendence in the Clinton Presidency Previous post 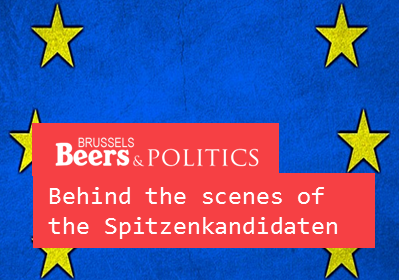 Behind the scenes of the Spitzenkandidaten

#BeersPoliticsEU welcomed Nereo Peñalver on Thursday 10/09. Nereo gave us an insider’s point of…